Enniskeen Country House Hotel (Newcastle Co Down) is closely linked with the World leading industries of the early 1900's in Belfast namely:

Enniskeen House was built in the late 1890s by R.W Murray a talented businessman from Virginia in the United States. Robert Murray emigrated from the US and was principal of Murray Sons & Co. Ltd tobacco manufacturers and director of Belfast Ropeworks Co. Ltd. At the time Belfast Ropeworks was the biggest rope making manufacturer in the World and the Belfast ship building yard was also the largest in the World. Murray Sons & Co. was created as a firm due to the high demand for tobacco by sailors in Belfast port, and from there flourished to selling tobacco out to 45 Countries worldwide. Murray Sons & Co. made many famous tobacco brands including 'Murrays Mellow Mixture' and 'Erinmore'. 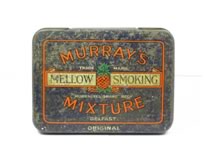 Murray Sons & Co. were well known for their 'brass neck' advertising and during the War dramatic increases in tobacco excise duty proved no deterrent: an advertisement for 'Murrays Mellow Mixture' pleaded!

"Don't stop smoking because tax on tobacco has increased. It is your duty to the state to keep on smoking"

Titanic Officer Murdoch was a keen smoker of Erinmore and it is known that Erinmore tobacco was on board Titanic on her maiden voyage.

In later years the Enniskeen House was owned as a private residence by Major Panter and also by H.Liddell, a well known linen manufacturer who supplied table linens for the finest dining rooms on board RMS Titanic - including the Captain's table.

Then in the 1960's it was purchased and converted into a hotel.